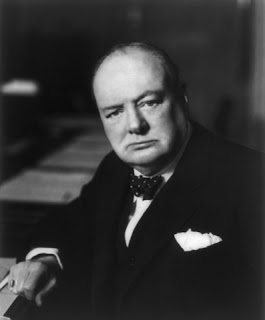 On this day in history, the First Canned Beer Went on Sale

Given his sense of humor I'm sure Sir Winston Churchill would have laughed at the fact that this was the month and day that he died. The biographies of his life fill bookcases. The products of his pen fill many more shelves, which probably explains that Nobel Prize in Literature. His paintings sell more for the artist's name than expertise, but for a guy who spent a great deal of his life trying to save the Western World, they aren't bad. The space required for a biography would take way to many pages, just click on anything that interests you and charge your glasses and lift a toast to one of history's truly great men.

The amount of blue in this article just might indicate an interesting life, particularly when you consider that movies, mini series, and books have been made about almost all of them.

30 Nov 1874 Winston Churchill was born in Oxfordshire in England at Blenheim Palace. He was the son of a prominent Tory politician, Lord Randolph Churchill and American born Jennie Jerome and descendant of John Churchill, 1st Duke of Marlborough

1897 Winston Churchill saw action with the Malakand field force, a description of which he later published in 'The Story of the Malakand Field Force'.

1898 Winston Churchill saw action with the Nile Expeditionary Force, a British mission to relieve Major-General Charles George Gordon at Khartoum, where he famously fought hand-to-hand against the Dervishes.

1900 Winston Churchill was elected as the Conservative MP for Oldham.

1906 Winston Churchill moved from the Conservatives to the Liberals.

13 Jan 1915 Winston Churchill presents plan for an assault on Dardanelles.

19 Feb 1915 Allied amphibious attack began on the Dardanelles and Gallipoli initiated by Winston Churchill, who later resigns as a consequence.

1917 Winston Churchill was appointed Lloyd George's minister of munitions and was involved in the mass production of tanks, believed to have played a large part in Britain's victory in World War II.

1919 Winston Churchill became secretary of state for war and air (until 1921).

10 May 1940 Neville Chamberlain resigns and is succeeded by Winston Churchill as British Prime Minister (until 1945).

1940 British Prime Minister Winston Churchill says of the Royal Air Force, 'Never in the field of human conflict was so much owed by so many to so few'.

1940 Winston Churchill says 'I have nothing to offer but blood, toil, tears and sweat.

1940 British Prime Minister Winston Churchill urges perseverance so that future generations would remember that 'this was their finest hour'.

1941 British Prime Minister Winston Churchill becomes the first British PM to address a joint meeting of the US Congress, warning that the Axis would 'stop at nothing'.

1943 Roosevelt, Churchill and Stalin met at Tehran to map out strategy.

Mar 1946 Winston Churchill proclaims an 'iron curtain' has come down across Europe in a speech at Fulton in the USA.

19 Sep 1946 Winston Churchill calls for a "kind of United States of Europe" in a speech he gives at the Zurich University.

14 May 1947 Fostered by Winston Churchill, the United Europe Movement is created. It is hostile to supranational organs and in favour of an intergovernmental cooperation.

1952 Prime Minister Winston Churchill announces that Britain has its own atomic bomb.

1955 Winston Churchill resigns and Anthony Eden succeeds him as British Prime Minister (until 1957).

1963 Winston Churchill becomes the first honorary US citizen when President Kennedy honours him with citizenship.

1964 British general election. Winston Churchill does not see re-election as a memeber of parliment, so effectively retires from politics.

24 Jan 1965 Winston Churchill dies at his home at 28 Hyde Park Gate in London, aged 90, from the after effects of a stroke that he experienced earlier in January.

30 Jan 1965 The state funeral of Winston Churchill is held. First funeral attended by a British Monarch for a person other than a family member. 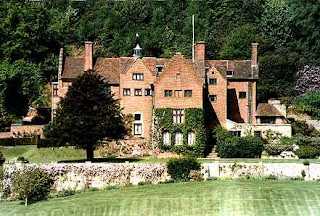 Churchill Painting of his home Chartwell
Posted by Durward Discussion at 4:59 PM

An incredible man...All of that statesmanship and one helluva partier and funny guy to boot. Cheers Jamie!!

Jamie, such a great fully informative post! I can't think of another politician, American or British, who'd have a fuller biography...maybe Oliver Cromwell, Benjamin Disraeli? Thank you for all your work.

I have a biography of Churchill by Martin Gilbert called Churchill: A Life. I've only read about half of it.

Thanks for this timeline. Churchill is one of those historical figures that I find fascinating.