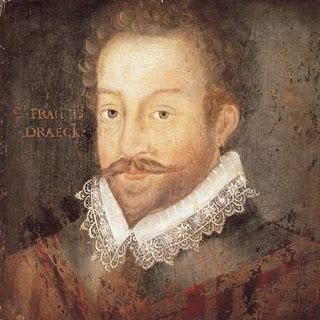 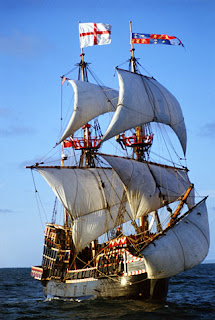 Golden Hind
In 1577, having nothing better to do for a few years, Sir Francis Drake left England to take a little cruise around the world in the Golden Hind. About a fourth of the way around in 1579, he anchored in a harbor that is now known as Drake's Bay just north of present-day San Francisco. He claimed the land for Queen Elizabeth I and England, and named it "Nova Albion". Unfortunately for Francis, this name didn't stick nor did the claim for England since Iberian navigator Juan Rodríguez Cabrillo had beat him to the area in 1542 while sailing North along the coast of Mexico. He was seeking the mythical Strait of Anián (the Northwest Passage) for Spain. He named the harbor in the south where he first landed San Miguel. This name didn't stick either since Sebastion Vizcaino came scrounging for pearls while doing a bit of surveying and renamed the place San Diego

Getting wind of a good thing, the Portuguese and Filipinos in the form Pedro de Unamuno and his crew in his galleon, Nuestra Senora de Esperanza arrived in 1587. Explorers like to name things, so he called this chunk of land Luzon Indios. This name lasted only a few days since he made the mistake most tourists make: He aggravated the natives. The group was attacked by native Indians two days later, and one of the Filipinos was killed. After getting mugged, Unamuno and his crew gave up further exploration of this part of the coast. For the most part all these out of towners left the place alone once they knew it was there and the local indians gave up mugging since there weren't any tourists in need of a good bashing.

Russian fur traders had started working their way down the coast from Alaska and by 1765 had gotten as far as the Farallon Islands off of San Francisco. Even though they weren't using it, Spain got it's international panties in a twist and quickly made plans for colonizing Alta California. A dual land and sea thrust was planned to settle Monterey with a stop at San Diego on the way. Plans were drawn up by the King's personal agent in New Spain (Mexico), Inspector-General José de Gálvez. The project leader was to be the recently appointed governor of Baja California Don Gaspár de Portolá. In charge of the missionaries would be Blessed Junipero Serra who immediately made slaves of the local indians and put them to work planting crops and building missions in the interest of turning them into good Christians.

This pushed the Russians back up north to Fort Ross and the status quo of making a lot of money off of furs. The Spaniards settled in making a huge amount of money provisioning ships going to and from Europe by keeping them supplied with agricultural products and cattle while living the good life in California for the next 100 years. And then all hell broke loose!

Posted by Durward Discussion at 8:42 AM

Thank you for the interesting history lesson. They were certainly a lot of people vying for California, weren't there?

It had to be interesting to live during the time of the Explorers finding all that new and "untouched" land. Now there's no more mystery.

I remember studying California history for weeks in grade school. As with so many places, it's rich and varied.

Thanks for this condensed refresher.

Jamie...my other comment here didnt take, but i wanted to tell you that is one of my all-time greatest most favoritest songs of all time....Lee marvin and paint your wagon....

there's 2 kinds of people, all right....them's going no where, and them that's going somewhere...meet an ex-citizen of no where......

I love that movie

Jamie: My Aunt Glenda, who was a teacher in the Sacramento area for many years had a Spanish map that showed California as an island, I believe this map dated to around 1540 or thereabouts, quite interesting.

Mrs. Fenty: You should read the Bible, Mr. Rumson.

Ben Rumson: I have read the Bible, Mrs. Fenty.

Mrs. Fenty: Didn't that discourage you about drinking?

Ben Rumson: No, but it sure killed my appetite for readin'!