Blessed are the peacemakers
for they shall be called the children of God.


I think that people want peace so much that one of these days governments had better get out of the way and let them have it.

There was never a good war or a bad peace. 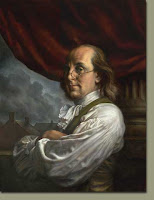 All we are saying is give peace a chance.

The structure of world peace cannot be the work of one man or one party or one nation. It must be a peace which rests on the cooperative effort of the whole world.

I was once asked why I don't participate in anti-war demonstrations. I said that I will never do that, but as soon as you have a pro-peace rally, I'll be there.

They shall beat their swords into ploughshares, and their spears into pruning hooks; nation shall not lift up sword against nation, neither shall they learn war any more.

Your armed struggles for profit
Have left collars of waste upon
My shore, currents of debris upon my breast.
Yet, today I call you to my riverside,
If you will study war no more. Come,
Clad in peace and I will sing the songs
The Creator gave to me when I and the
Tree and the stone were one.

From A Distance - Bette Midler

Posted by Durward Discussion at 11:10 AM

Jamie, you gave us quite a bit to think about with your Manic Monday post on peace. Great photos and rememberances. Have a great week!

Great quotes, and even greater people.

Words are powerful things. We must say them, and we must listen, and then we must do the work required.

You covered it from stem to stern as you always do. It's always a great history lesson here... Peace :)

wonderful job-couldn't have said it any better.

You put a lot of time and effort into this post. Great job. :)

Peace be with you and yours...

wonderful presentation. with so much wisdom in so many public policy and culture leader in the last hundred years, how did we still go so wrong?

hey, i grew up about a two hour drive south of you in Longview.

jamie.....one of my favorite songs....bette midler...i forget the one who wrote it but it gives me the old goose bumps when bette sings it....thanks

I love this section here:
If you will study war no more. Come,
Clad in peace and I will sing the songs
The Creator gave to me when I and the
Tree and the stone were one.

Thank you for sharing! I enjoyed reading your post today!

the Book of Keira said...

Oh great quotes, Jamie!
I was going to google for peace quotes, but I have to look no farther than here!

Thank you for sharing these very inspirational quotes, Jamie.

Jamie thanks for stopping by my blog (it's kinda cool to have new visitors while i'm out of town playing at Disney!) - this was a GREAT post, very moving - especially the Maya poem. I'll be popping back by. Do give me a shout if you post a poem again on mondays and i'll add you to the Monday Poetry Train! (waving like a dweeb from Mickey-land - Rhi)

wonderful portrayal of the peace makers.

I'm not playing Manic Monday, so ordinarily, I don't comment...but just wanted to tell you: thank you!

Maybe one of one your best posts in a while. I really enjoyed all the quotes. I think Eisenhower deserves a second look by a lot of people, especially in light of popularizing the "military-industrial complex" term.

I was going to say, "great quotes," but everybody else already said it. Peace...

What a wonderful post, Jamie. I especially resonate with the quote by Mother Theresa.

Everyone is invited to see my Manic Monday post... a bit late, but finally up :o) I hope you can stop by.

Thank you for offering such a poignant collection of peaceful quotes. Maya Angelou's quotation specifically the phrase "not study war no more", may be growing within our universities as I recently read that there is a strong decline in military focused history courses being taught.

Be well and enjoy the day

What a great collection of peace quotes!