Jessie and The Pathfinder 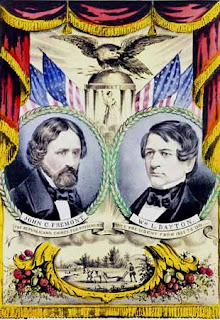 If you like historical novels, you might want to get a copy of "Imortal Wife" by Irving Stone.

Fremont (nicknamed The Pathfinder) had gained his fame as an explorer of the American west in the 1840s and the man who just happened to be in California when the "Bear Flag Rebellion" took place. He put an end to the rebellion in order to bring California in on the American side of the war with Mexico and then eventually to statehood following the discovery of gold.

His wife, was Jessie Benton Fremont (1824-1902), daughter of Senator Thomas Hart Benton of Missouri who disapproved of his daughter's marriage to Fremont when she was only 17. She had been raised with a man's education to be Benton's right hand in the political salons of Washington DC. It was the language, writing, and political skills that she learned from her father that made it possible for her rather rambunctions and rough husband to rise to the top of the political ladder.

While the Fremont candidacy failed, Abraham Lincoln appointed Frémont as the commander of the Department of the West in 1861, Jessie served as his unofficial aide and closest adviser. After the Civil War, the Frémonts’ financial situation took a downturn. Jessie supported the family by writing A Year of American Travel and Souvenirs of My Time.

The relationship of the Fremonts, the picture of the times with the Republican party's liberal opposition to slavery and rise as a political party, coupled with the development of the United States is an interesting period filled with courage, humor, and political intrigue. 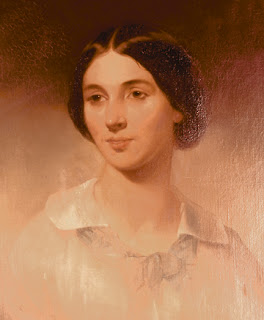 Posted by Durward Discussion at 5:06 PM

Great post, Jamie!
So, is this where Fremont street in Vegas gets its name?

and the city of Fremont and Fremont HS in los Angeles. If it says Fremont anywhere in the west you can pretty well guess that it was named after him. His expeditions were like starring on Broadway at the time ... he was considered a very glamorous figure and having a brilliant, talented, well connected woman for a wife didn't hurt.

Additional information on the Fremont expeditions can be found HERE

I remember learning a little about John Fremont when I lived in California. We even had a Fremont Street in Stockton and no doubt it was named after him.

As always, thanks for the history lesson! Very well done!

I recall studying Fremont here and there throughout school. Growing up in the bay area, his name was as popular as Leland Stanford.

Great post, I had forgotten how Wise you are....and how wonder it is stumble this way and read History....and other wonders....