HBO has a new series "John From Cincinati" that is so far out and odd that you can't help but watch just to find out what happens next. If you have HBO or "On Demand" and haven't seen the first two episodes, catch up ASAP. Fair warning, I think every other word is an obscenity, but if you got through Deadwood and The Sopranos, you'll manage not to cringe too often.

Since the title refers to the midwest, you won't be at all surprised that the setting is Imperial Beach, California

Read the home page for the series linked above to get background on the actors and the episodes, but just to give you a hint of flavor, in the first episode after you think you have been watching a pretty mundane surfer show, the camera pans down to show one of the lead characters floating about two feet off the sand and in episode two things start to get really odd.

If you are watching or after you have watched, let me know what you think is going on. 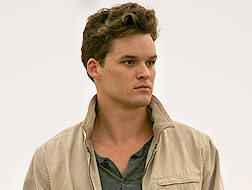 Posted by Durward Discussion at 5:25 PM

Email ThisBlogThis!Share to TwitterShare to FacebookShare to Pinterest
Durward Discussion,History,Politics John From Cincinnati

I'll have to check this out. I have seen a couple of interviews and cuts from the show. Stop by today Jamie and become a Neo-American Patriot. Cheers!!

Thanks or posting on this...I think Thursday HBO is running a mini-marathon on this...cowabunga what perfect timing....( I guess I will forgive them for the Fade to black...)

Bear said...
This comment has been removed by the author.
9:56 AM