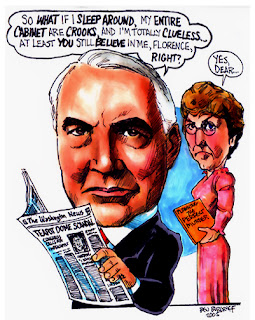 If you have HBO and like either history or a good reason to laugh, be sure to watch Assume The Position with Robert Wuhl. This show isn't just funny; it ranges from smiling ironically at the familiar to roll on the floor and scream funny. It also fits with my topic of yesterday: History is just plain fun and darn if it doesn't repeat itself every time you turn around.

One president who gets a good going over by Wuhl is the totally unlamented (except by family members) Warren G. Harding. Now Harding was an amiable man, too much so for his own good, and he loved doing favors for friends. Unfortunately, he liked to do those favors with the assets, laws and money of the United States. If this is starting to sound familiar, you'll work it out.

Harding had been a rather unremarkable U.S. Senator from Ohio, and won the Republican nomination in the 1920 deadlocked convention. He was elected in a landslide with his slogan of "return to normalcy" following WW I. He was aware of his own failings and promised to appoint a cabinet of the "best minds" in America to do the work of the presidency for him. He did choose a lot of intelligent men. Unfortunately, they were more interested in their own wealth than they were in the public welfare. They set about corrupting the departments of the Interior, Justice, and the Veterans Bureau ... have you caught up yet? Environment, selective prosecution and mistreatment of soldiers coming home from war.

On August 1 of 1923, all the chickens were ready to come home to roost. Warren had been off vacationing with rich buddies in Alaska and points south in order to get away from the rumors about the corruption in his administration. Whenever things got dicey, he liked to leave town. Sadly, he died of a stroke in San Francisco before the scandals all caught up with him. Vice President Calvin Coolidge was sworn in the following morning.

For the rest of his first term, one of President Coolidge's principal duties was responding to public outrage over the Teapot Dome oil-leasing scandals, the revelations of fraudulent transactions in the Veterans Bureau and Justice Department, and the reports of his predecessor's multiple extramarital affairs. Well we might have missed this one with the current administration, but they managed to hit three out of four for another go around of history repeating.

So don't get upset. As Wuhl says: We'll get through it. We always do.

Posted by Durward Discussion at 5:53 AM

Other Harding tidbits- he had a long running love affair with a woman who he supposedly had sex with in a White House broom closet. He wrote her long letters- some as long as 22 pages.....he liked to play card in the White House with his cabinet...he was lazy and gullible....allegedly, he had an African-American Grandfather, making him our only "black President." He was probably our last TRUE isolationist President....some people think he was murdered....the college he went to- i think it was Central Ohio University, burned down, and was never rebuilt.....he was a newspaper man.....in personal makeup, he was very similar to Dan Quayle.

There's a fantastic book about him called "The Shadow of Blooming Grove" that i read years ago. I still have it in my library, though i think it is out of print.....

Sounds quite fascinating, I really don't know much at all about Harding and I probably should.

While I was reading this I was thinking about the trials and tribulations of President U.S. Grant and the problems he had with all of his Cabinet members, too. He was an honest man, though, and I think just got taken advantage of by a lot of corrupt and greedy men.

Linda, Grant was not personally corrupt. Unfortunately, he was way to loyal and as a result there were scandals in his administration and people who got wealthy because of them.

This cannot be said about Grant himself. He was impoverished towards the end of his life and only writing his autobiography (edited by Mark Twain or possibly ghost written) enabled him to leave an estate to his wife Julia.

So, are we to leave it to Laura Bush to end this nightmare administration just as Florence Harding did?

I'll check out the show, thanks!

Just doing a little "blog surfing" today, and stumbled upon your site. I wanted to leave a quick note, and let you know how much I liked your page. Take care!! :-)

Eric from the Speedcat Hollydale Page

I love that video. Of course, I luvs me some Shirley Bassey.

I enjoy Robert Wuhl as well - I do have HBO so I may have to look for this program.

I have HBO ,, but I will have to look for this..you always do the bes summarys...and history with as twist....