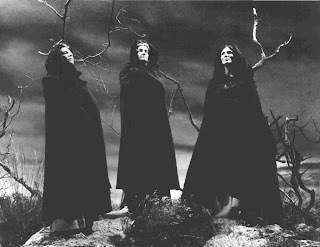 I will not be afraid of death and bane,
Till Birnam forest come to Dunsinane.

I've sort of wandered away from Scotland for awhile now, and today's bit of history gives me a darn good reason to wander back. First off it has been 950 years since Macbeth bit the dust at the hands of Malcolm Canmore. Both men had claims to the crown of Scotland and Shakespeare made Macbeth and his lady a little more villanous than history depicts, but it is worth it for one of the bard's female roles and the prediction of the three witches that Macbeth was safe until "Birnam Wood shall come to Dunsinane". As is the case with most curses, this one had a bit of a twist to it since Malcolm had been baptized under branches from the Wood, and had his soldiers disguise themselves as bushes to sneak up on the castle. All of which led to one of the better puns in Shakespeare only to be topped by another centuries later by humor writer Max Shulman.

1057 : At the Battle of Lumphanan, King Macbeth of Scotland is slain by Malcolm Canmore, whose father, King Duncan I, was murdered by Macbeth 17 years earlier. Under King Duncan, Macbeth was governor of the Scottish province of Moray and a trusted military commander. However, he opposed Duncan's ties to the Saxons in the South, and he rose in rebellion. On August 14, 1040, Macbeth killed Duncan in a battle near Elgin, and he was crowned king of Scotland in his place.

In 1054, after 14 years of rule, King Macbeth suffered a major military defeat at the Battle of Dunsinane against Siward who was acting on behalf of Malcolm Canmore, Duncan's son. Malcolm then gained control of the southern part of Scotland and spent the next three years pursuing Macbeth, who fled to the north. On August 15, 1057, Macbeth was defeated and killed by Malcolm at the Battle of Lumphanan with the assistance of the English. Malcolm Canmore was crowned Malcolm III in 1058.

All of which brings us to one of the world's greatest puns ruined by a detailed explanation courtesy of one of my favorite places on the web:

Dear Word Detective: I grew up in the 1930s, and we were all pretty well behaved kids. Our lawlessness amounted to some Halloween pranks, and the occasional breaking of a street light with a sling shot. When a police car came into the neighborhood, however, we acted as if they were after us for some terrible crime, and the cry went out "Cheese it, the cops !" What is the origin of that phrase "Cheese it"? Did it come from gangster movies, or is it some old thieves' cant? My favorite author, Max Shulman, used the term to paraphrase Shakespeare's "Burnham Wood Approaches" by saying, "Cheese it, the copse.".

Excellent. A "copse" is, of course, a small forest, and, for the benefit of those who have never read it, in Shakespeare's play "Macbeth," the murderous usurper Macbeth is haunted by a prophecy that he will have nothing to fear until "Burnham Wood comes to Dunsinane." Forests being not notably mobile, Macbeth is somewhat reassured, but still nervous. He's nervous with good cause, as it happens, because when justice finally comes, it's in the form of an army camouflaged with branches gathered from Burnham Wood marching towards Dunsinane, and the murderer Macbeth's goose is cooked. Unfortunately, I fear that I have just murdered Mr. Shulman's fine joke.
Posted by Durward Discussion at 6:09 AM

Ah the poetic license...take a dramatic story and tweat it to increase the drama for the entertainment value. Make the villains darker and the heroes more virtuous.

Macbeth is my favorite work of the Bard's. I saw the play on PBS years ago - can't remember the names of any of the performers, but I do recall being absolutely mesmerized by the actress who portrayed Lady Macbeth.

Too bad Kenneth Brannaugh skipped this one during his "make Shakespeare relevant and accessible in film again" phase.

Unfortunately, he probably divorced Emma Thompson before she could do the mad scene and cost them several more Oscars.

I found this through a search for the Dunsinane quote - I like the pun too!

The Bard was a card!!! I wonder if he really realized or intended the multiple hidden meanings to all his writings, or was he like most playwrights more concerned with keeping the family home and making the wife happy.