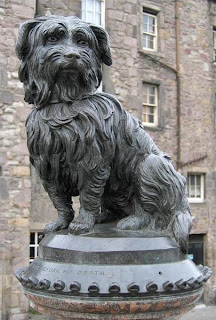 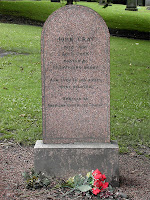 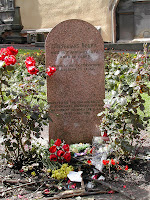 There are many stories about dogs and how faithful they are to their owners, but few are as famous as the little Skye Terrier whose statue is visited by thousands every year. John Gray came to Edinburgh in the early 1800's where he joined the police force. One of his conditions of service was that he have a watch dog, and he obtained a little pup he named Bobby. After a few years John Gray passed away in 1858. He was buried in an unmarked grave in old Greyfriars Kirkyard. His grave became scarcely noticed with little human interest, but the spot was not totally forgotten. The dead man's dog, Bobby, lay on the grave, only leaving for food, without once breaking faith with his master until his own death in 1872. The owners of the coffee house fed Bobby and John Traill the owner from 1862 on gave him a dish engraved "Bobby's Dinner Dish" that can be seen at the Museum of Edinburgh.

When a new regulation required that all dogs must be licensed or destroyed, Sir William Chambers, Director for the Scottish Society for the Prevention of Cruelty to Animals paid for Bobby's licence and presented him with a collar with a brass inscription "Greyfriars Bobby from the Lord Provost 1867 licenced".

In 1870, Baroness Angelia Georgina Burdett-Coutts asked the City Council for permission to erect a granite fountain with a statue of Bobby placed on top near the Kirkyard as a lasting memory of the little Skye Terrier Bobby upon his death. William Brody sculptured the statue from life, and it was unveiled on November 1873. The original sculptured model and his collar are in the Museum of Edinburgh. After his death, Eleanor Atkinson wrote a somewhat embellished story that made Bobby world famous and at least two motion pictures have been based on his many fictional adventures around Edinburgh.

"The American Lovers of Bobby" erected a Red Granite stone to mark John Gray's grave in Greyfriars Kirkyard, the inscription reads "John Gray - died 1858 - Auld Jock - Master of Grayfriars Bobby - Even in his ashes most beloved". Bobby died in 1872 and could not be buried within the cemetery itself, since it was consecrated ground. Instead he remains faithful even in death where he was buried just inside the gate of Greyfriars Kirkyard, not far from John Gray's grave. His headstone was erected by The Dog Aid Society of Scotland. The inscription reads "Greyfriars Bobby - died 14th January 1872 - aged 16 years - Let his loyalty and devotion be a lesson to us all - Unveiled by His Royal Highness The Duke of Gloucester CCVO - on the 13th May 1881"


Posted by Durward Discussion at 9:03 PM

That is a wonderful story--that dog had such a faithful owner, nothing can come between a man and his dog! great post.

I've heard this story before, and I've always loved it. Thanks for sharing this wonderful story of faith.

What a wonderful story ! I never had heard of that. Was very nice to read it with my morning coffee !

DEXTER SEZ: just read the story about that dog that went to the train every day after his master's body was shipped back east...where was that? ...can't recal...nebraska or ?...loved Bobby's story...I am a sucker for dogs!..DEXTER

I cried the first time I read this story...I love dogs! They are incredible to me. Thanks for reminding me of Bobby (and making me cry again!!!)
~~~Blessings~~~

inspiring story to live by.

Bobby was a grand dog indeed... It's a lovely story.

What a wonderful story on faith. I hadn't heard this before. Excellent MM Jamie. :)

I am surprised that more people did not write about dogs today. Great story-I'd never heard of it before either.

Thank you for introducing me to this wonderful story of faith, love and devotion. It was a wonderful way to start the day.

What a sweet story.. animals are such faithful beings. People could learn a lot from them, if they'd just take the time.

**blinking away tears** How sweet!

Had heard the story before, but you do it better justice.

Very apropos considering the news from Atlanta and Virginia today.

I hadn't heard this one before. I sometimes feel that my dog must know something about me I don't... If we all treated eachother the way dogs treat us, the world would be a better place.

Thanks for sharing this story. It was a new one for me as well. I am so amazed at the stories of such faithfulness in pets. They can and do form loving, lasting, relationships with us humans and each other....we should pay more attention to them!