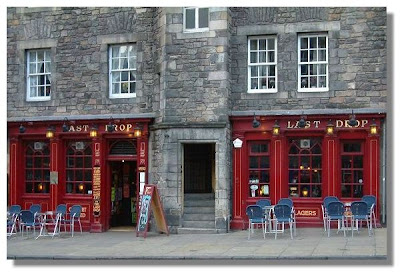 Reputed to be haunted, The Last Drop is a traditional pub, which stands in Edinburgh’s Grassmarket, an area notorious for public hangings until the 18th Century. The precise point on which the gallows stood, just opposite The Last Drop, is now marked by a St. Andrew’s Cross in rose coloured cobblestones bearing the inscription: "For the Protestant faith, on this spot many martyrs and covenanters died".

The Last Drop commemorates the last public hanging in the Grassmarket and also refers to the drop through the trapdoor on the gallows, through which the condemned prisoner fell. It is said that the executioner took the condemned man to this pub for a drink just before hanging him, and there is a drink in here called the 'Executioner cocktail' which is a potent mix of strong cider and strong ale.

The structure of the Last Drop was rebuilt in 1929-1930. Originally two tenements stood here, but these were knocked down and rebuilt using the original stone, which dates back to the 17th Century. The doorpiece is dated ‘1634’, so although the present day building is 20th Century, the stone used in construction comes from a much older site which perhaps could explain the resident ghost! The spectre is unlikely to be that of a condemned criminal as it is a small girl dressed in medieval clothing. She is often seen in the cellar and also in the bar area. She seems harmless and playful and often plays pranks on the staff! Many hear their name repeatedly being called by an unseen person when they are alone on the premises.

Inside there is lots of olde-worlde paraphanalia and decor with lots of rope to be found. A traditional pub with a rather sinister theme that attracts a fair share of tourists. Friendly bar staff and great haggis, neeps and tatties and quite a good pint of Guiness too.

As a form of execution in England, hanging dates from the Saxon period, approximately around 400 AD. Records of the names of British hangmen begin with Thomas de Warblynton in the 1360s; complete records extend from the 1500s to the last hangmen, Robert Leslie Stewart and Harry Allen, who conducted the last British executions in 1964.

The first permanent gallows was believed to be set up in Tyburn England in 1571, where it was common for 10,000 people to come and witness hangings, and 50,000 or more when there was a lot of publicity. The last woman to be hanged was Ruth Ellis on July 13, 1955 by Albert Pierrepoint who was a prominent hangman in 20th century in England.

The last hanging in Great Britain happened in 1964, when Peter Anthony Allen, at Walton Prison in Liverpool, and Gwynne Owen Evans, at Strangeways Prison in Manchester were executed for the murder of John Alan West.

Posted by Durward Discussion at 10:38 AM

Wow, what an awesome looking pub with such a history!! When in Edinburgh, I must DROP in!! The Executioner cocktail doesn't sound too appealing to me though :O

Wonderful informative post, exactly what I would expect from you. I never realized that they were still hanging people all the way up until 1964.

Another wonderful history lesson. Didn't have a clue about any of it either. Very well done. Have a great MM. :)

My knowledge for the day. Thanks for sharing!

This was a difficult MM for me. However, when in doubt, I usually go with Serena! Have a great MM! peace, Villager

Very nice story about the Pub ! I just came back form the English east coast and there too are many Pubs with a lot of history !

Sounds wonderful. I would like to go there. I love history.

regarding your comment on my blog. Yes she is going to see hairspray this week. LOL.

Trust the last hanging to be about 12 miles from where i live :)

Haggis, neeps and Guinness all in one place, Bliss!

Wow, history and a ghost story in one post! I enjoy your MM posts a lot, Jamie.

I don't think I'd be hanging around in there after closing.

Very cool. But I wouldn't want to be on the premises alone even with a friendly ghost who knows my name.

I've just finished writing a book on pub names and came across the "Last Drop" name in my research. A pub by this name was apparently owned by Albert Pierpoint, Britain's last hangman.

There was also a novelty item produced called the Last Drop Glass, a beer glass or tankard with the figure of a hanging man engraved on the base. This figure was only visible when the glass was drained, leading to the joke that, even if you emptied the glass, there was still one drop left (through the trap door).

A bit of gallows humour!