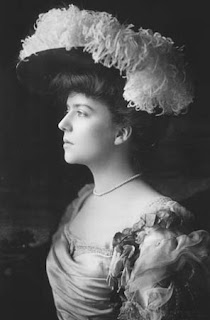 "I can be President of the United States, or I can control Alice. I cannot possibly do both."
Theodore Roosevelt

In this political season, we will be innundated with information about the candidates' families. Our modern media disects every action of the potential "first children" even while their parents plead for privacy for at least the younger members of the family and try to diminish the importance of bad acts by the older ones. Every remark, bit of gossip, and scandal will be disected as a reflection on the potential Presidential parent.

There is nothing new about this interest, but the ones who captured the public imagination during their White House years seldom maintained their share of the limelight long after their departure. That kind of fame belongs to only one White House child who managed to be a star from her childhood to her death: Alice Roosevelt Longworth.

She was the oldest child of Theodore Roosevelt, and the half sister to five younger siblings, but Alice was the one who enjoyed shocking people, a characteristic which remained over her long life. The media loved this presidential wild child. They dubbed her Princess Alice, and the attractive young woman was the source of songs, poems, even a color (Alice Blue). When her father banned her from smoking in the White House, she went to the roof to puff away. She bragged about setting speed records in her friend's roadster, as they drove around the Northeast unchaperoned. While representing her father on an official government junket to the Far East, she literally made a splash by jumping into the ship's pool fully dressed. Hardly scandalous these days, but her antics were quite newsworthy at the turn of the century.

She was a lifelong Republican who flirted with Democrats at her salons and even helped her cousin Franklin by referring to his opponent Dewey as, "That little man on the wedding cake". She became noted for her acidic remarks and quips to the extent that many were attributed to her that she claimed never to have said, though her most famous was embroidered on a pillow in her home: "If you don't have anything nice to say, come sit by me."

Through her marriage and widowhood she remained in Washington where she became known as "The Other Washington Monument". Her last public appearance was in 1976 for the bicentenniel. Alice died in 1980, at the age of 96. About her own lifelong notariety she said, "I've always believed in the adage that the secret of eternal youth is arrested development."

So when you hear what any of the potential White House children might be up to now or once taking up residence, be aware that they have some tiny shoes to fill if they ever hope to top Alice. Even Ruth Cleveland only got a candy bar.


A new manner of fashion I'd found,
And the world seemed to smile all around.
'Til it wilted, I wore it,
I'll always adore it,
My sweet little Alice blue gown!

Posted by Durward Discussion at 12:30 PM

At the time she may have been scandalous, but in retrospect she seems like a fun-loving adventurer.

Neat! Thanks for the additional info!

I'm sure that I would have liked Alice and that she would have been a real hoot to hang around with!