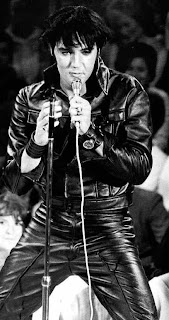 He died 30 years ago today. There are people who are still in mourning and the tourist buses are lining up outside of Graceland. My memories of Elvis are much less intense, but very affectionate.

My very first boyfriend introduced me to the first Elvis album and started an addiction that I finally outgrew eight years later when I finally dumped my Elvis scrapbook even though I continued to love the music.

A friend of my mother who stocked juke boxes gave me a 78 of "Heartbreak Hotel". I try not to think how much this would be worth now if I hadn't sat on it 50 years ago.

My girlfriend across the street had a sister who was a hairdresser in Westchester. Whenever Elvis and entourage would stop for a meal, she would call and we would dash to the diner to gaze in rapt attention. This was made complete the day he bought our hamburgers. Being still semi-sane we actually finished the meal.

I was ironing and begging my mother to take me to the midnight premier to see Elvis in "Loving You". She was the only person I ever actually heard say, "What's an Elvis?". I opened the movie mag, and her response was, "Well, you have good taste!".

She gave in and took me. Fearing the worst, police were stationed at the exits. The theater was almost empty since other Fresno parents seem to have been less lenient than mine. Early in the movie, the story high head turned sharply, the intense blue eyes flashed during "Got A Lot of Living To Do". I started to leap up with a hormonal scream almost uttered when the hand came down on my wrist, "They like it if you resist at least a little." I plopped down and started giggling at what was probably the best advice ever received about men that has kept me laughing ever since.

When dating the fiance, the movies were G. I. Blues and Blue Hawaii. Inside my wedding ring a song title: MTTYLTTT - More Today Than Yesterday, Less Today Than Tomorrow. The marriage was a nine year fiction as well.

By this time I was hooked on the Beatles but loved the '68 special and thrilled to see the Elvis I remembered from my early teens.

Thirty years ago: The news - By this time, I had fully outgrown Elvis other than the music. It was still a shock and sorrow.

Today fifty years removed from that first album, I still love the voice. Elvis was a unique period in the Boomer experience and totally different from the Bobby Soxers who went wacko over Sinatra to get them through a world war.

So for the man: Rest In Peace
For the Performer: Sing Forever

This is the song I always think of when remembering Elvis. I was 12, he was 21 and it was a one sided, love affair, but one I've enjoyed now for half century, and the song I love from the '68 Comeback special before the drugs and downfall.

Posted by Durward Discussion at 1:24 PM

Thank you for the Elvis. My stepdad is a tremendous fan, and I gradually have developed a deep appreciation for the man's talent.

He could sing virtually anything. His voice was nearly perfect.

My mom saw him several times in Vegas. But our favorite memories of Elvis are from the 1968 special. I don't know why it was always so hard to find on DVD, but I did finally find it - my folks play it often.

but my dad loved Elvis movies and we had 2 drive-ins of equal distance in opposite directions from our house.... so I've seen every Elvis movie at the drive-in.....

I still will watch them whenever they pop up on TCM...