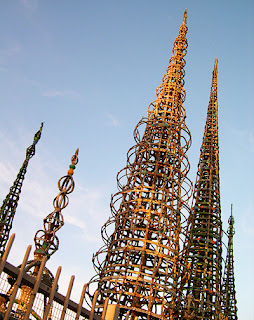 With everything else that has been happening I almost let this anniversary go by without comment. It is an event whose repercussions are still felt. At the time, since I was familiar with both the neighborhood and the conditions, I turned to a friend and said, "I'm surprised it didn't happened sooner." Here is a contemporary newspaper report of the events New York Times, and for some perspective the Wikipedia entry

The song below written by Frank Zappa as well as the history for the area tells of some of the conditions that existed in Watts as well as the frustrations that finally drove young people over the edge and led to the loss of life and destruction of property in an area that could least weather either. Do not confuse the riots in this time period with anything that might happen today. This was before the massive influx of gangs and drugs. It was a time when there was almost no way out of the segregation, and the police in LA at the time had a reputation that would make Mark Fuhrmann sound like a saint.

Civil rights were just beginning to be a national issue, block busting was going on at the same time real estate covenants still read no Negroes, Mexicans, Asians or Jews. It took very little to light the flames that became the Watts Riots 42 years ago. Combine this with a police force that treated the inhabitants with little respect or consideration.

Despite the fact that Los Angeles is the country's only major city founded by settlers who were predominantly of African descent, it had only 2,100 African-Americans in the 1900 census; by 1920, there were approximately 15,000. In 1910, the city had the highest percentage of black home ownership in the nation, with over 36% of the city's African-American residents owning their own homes. W.E.B. Dubois wrote in 1913, "Nowhere in the United States is the Negro so well and beautifully housed."

That changed in the 1920s, when racial restrictions in housing, originally aimed at Asians, Mexicans and Jews, were applied to blacks. Blacks were confined to Watts and other communities in South Los Angeles, which received far fewer services than other areas of the city. These policies led to housing problems in the 1940s as growth in the defense industry brought increasing numbers of African-Americans to the city. Efforts to provided integrated housing were turned back under a barrage of red-baiting directed at the public housing authorities in the 1950s courtesy of J. Edgar Hoover who believed all movement towards Civil Rights was a Communist plot.

While the City and County did take some steps to deal with the lack of social services for the black community after the Watts riots - most visibly by building a County hospital to serve the community - in most ways things only got worse over the twenty-five years after the riots. Closure of the automobile and tire factories and the only steel plants and shipbuilding sites in the area stripped Los Angeles of the high-paying industrial jobs that had opened up for African-American and Latino workers. At the same time, the drug trade and gang warfare reached crisis levels. The LAPD, from the time of Chief Parker's regime in the 1950s, had become even more alienated from, and hated by, minority communities it was supposed to protect and serve.

In the late 1950s and early 60s, I could visit people, go dancing in the clubs in the area, attend a virtually all black school on the fringes of Watts, and never feel in the least afraid or intimidated by the residents. Since that time, the areas educated and talented black people have been able to live anywhere they want by virtue of their achievements, leaving behind a hard core of poverty, drugs, alcoholism, poor education and hopelessness. Until that cradle of hopelessness is changed, crime and riots are the natural outcome.

Well I'm about to get sick
From watchin' my TV
Been checkin' out the news
Until my eyeballs fail to see
I mean to say that every day
Is just another rotten mess
And when it's gonna change, my friend
Is anybody's guess

Wednesday I watched the riot . . .
Seen the cops out on the street
Watched 'em throwin' rocks and stuff
And chokin' in the heat
Listened to reports
About the whisky passin' 'round
Seen the smoke and fire
And the market burnin' down
Watched while everybody
On his street would take a turn
To stomp and smash and bash and crash
And slash and bust and burn

Well, you can cool it,
You can heat it . . .
'Cause, baby, I don't need it . . .
Take your TV tube and eat it
'N all that phony stuff on sports
'N all the unconfirmed reports
You know I watched that rotten box
Until my head begin to hurt
From checkin' out the way
The newsman say they get the dirt
Before the guys on channel so-and-so

And further they assert
That any show they'll interrupt
To bring you news if it comes up
They say that if the place blows up
They will be the first to tell,
Because the boys they got downtown
Are workin' hard and doin' swell,
And if anybody gets the news
Before it hits the street,
They say that no one blabs it faster
Their coverage can't be beat

Hey, you know something people?
I'm not black
But there's a whole lots a times
I wish I could say I'm not white

Well, I seen the fires burnin'
And the local people turnin'
On the merchants and the shops
Who used to sell their brooms and mops
And every other household item
Watched the mob just turn and bite 'em
And they say it served 'em right
Because a few of them are white,
And it's the same across the nation
Black and white discrimination
Yellin' "You can't understand me!"
'N all that other jazz they hand me
In the papers and TV and
All that mass stupidity
That seems to grow more every day
Each time you hear some nitwit say
He wants to go and do you in
Because the color of your skin
Just don't appeal to him
(No matter if it's black or white)
Because he's out for blood tonight

Posted by Durward Discussion at 1:32 PM

Didnt realize this was the current anniversary, but it makes sense with the heat. There's a wonderful account of this in "The Glory and The Dream" by William Manchester.

My stepdad was on the CHP during the riots. He doesn't dispute the allegations of racism against LAPD, but he does have a slightly different perspective as an insider.

I've heard some of his stories. The main lesson I took from it is that in the face of man's inhumanity to man, there's only so much people will take society implodes.

There were good guys on the LAPD. Unfortunately, their hands were often tied by the prevailing ethos of the department.

Watts was caused by a lot of things. That was only one aspect. There was the feeling finally rising to the surface that segregation was wrong, the loss of jobs, the summer heat, just one thing piled on top of another.

Jamie --> this is an extremely good post. I was only six years old ... living in Los Angeles, CA ... when the Watts Riots occurred. The sad thing was that the situation repeated itself again in 1992 or so when police beat up Rodney King.

Great Post! Very informative. Did not know a lot of the facts behind the development of LA. Thanks Villager for the link.