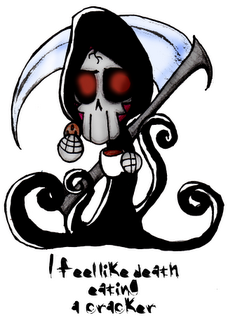 Linda over at Are We There Yet is holding a contest. The prize is a coffee cup with one of her daughter's unique designs from Artmunkey. All you have to do is bare your soul and let her know when you felt like "Death Eating A Cracker".

This one is easy and will appeal to the dispatcher in Linda. It was 1981, and I had just rented a house that had been previously owned by an elderly couple. The yard was incredibly overgrown and in an insane spurt of yard work I decided to take on a the overgrown limbs of a climbing rose bush ... bush my eye this thing was well on its way to giving the Amazon jungle a run for it's money.

Innocently raising the pruning shears above my head , the blades went click, my back went WHANG, my mouth opened with the dead silence of absolute agony, and the next thing I knew I was down on the ground with a paralyzed left leg. So I dragged myself into the house, dialed 911 and almost immediately got two of the most pleasant, handsome, and almost totally useless firemen at my door. They weren't in an ambulance. The rule said hey couldn't drive me to the hospital in a fire truck ... that will teach me to be more specific when whimpering. It would be a half hour and and a very expensive ambulance if I wanted one. What to do ... what to do?

Now I know that this isn't supposed to be a funny post but as I was reading it I couldn't help but laugh out loud! While I can sympathize all too well with the back and leg issues (I was never in traction but did undergo surgery), I think having two handsome firemen come to your rescue has got to be sort of nice. Well, maybe if you hadn't felt like just dieing right there on the spot!

I'm just wondering what on earth you told that 911 dispatcher that you were sent firefighters instead of EMTs?? And why didn't one of the handsome firemen drive you in your car to the hospital while the other one followed in the Big Red Truck (BRT in dispatch lingo!).

What a great story and a great entry to the contest! Good luck, maybe your other mug won't be lonely for too long!

I wrote it to be funny. The guys and I were actually laughing at the regulatory nonsense at the time between my screams of anguish. They couldn't drive my car because of insurance and their truck was EMT equipped but not allowed passengers.

I've paid for that event for a quarter of a century.

That event pretty much defines "death eating a cracker!" Aren't "regulations" wonderful? Tell me you let someone else do the yard work now! Good story (though I'm sorry it happened!).

very funny and well told...and you must win the mug- where do we vote ?

I believe there is only one judge and that is Linda. In the article there is a link to "Are We There Yet". It will take you to her site which happens to be worth reading even when she isn't showing off her daughters wonderful cartoons.

I'm sorry but I had to laugh too. Not at your situation and pain of course, but at the way you told it.

I was fortunate when I had a little home accident that the 911 operator actually did send EMT's. Unfortunately they also sent the fire department when I told them that the front door was locked and I didn't think I could get to it to let them in.

So they marched up to the front door with axes and tools to break in. Luckily I was able to open the door for them after all.

I laughed but using the whang made me cringe :(

funny but painful. i've never had my back go out but i've seen it with my husband first hand and know that it is something i hope that i never experience! great entry for the contest!